All airlines take you from point A to point B in much lesser time when compared to land or sea travel. But, taking a step further into the airline industry, while traveling from one point to another, the amenities differ based on the airline you are traveling with. We, at iEagle, have taken the liberty to provide you the difference in amenities provided by two of the major airlines across the world – Delta Airlines and United Airlines. 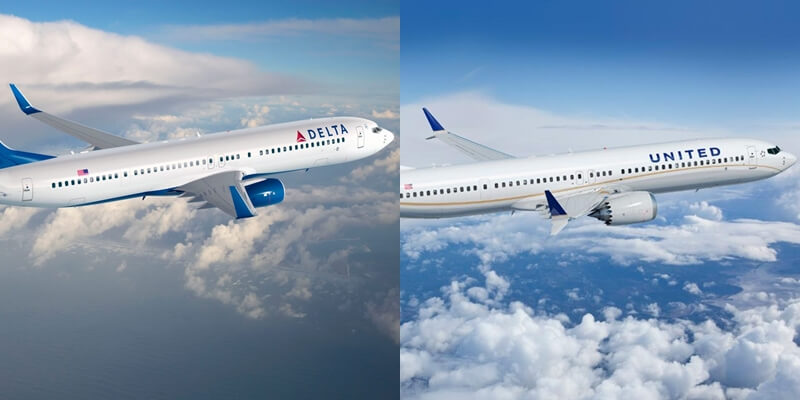 Delta Airlines’ economy seats are of the standard size as most of its aircraft have a total number of 139 seats with a pitch of 31 inches and a width of 17 inches. However, in a few aircraft, depending on the seat layout, you might get a few extra inches of legroom and width. But, the maximum pitch and width you can ever get on Delta Airlines economy flights are 35 and 18.5 inches respectively.

On the other hand, most of United Airlines’ aircraft have a total number of 120 economy seats with similar pitch and width. However, as mentioned above, owing to the seat layout in a few aircraft, you might get a few extra inches of legroom.

Both airlines have charging sockets on their seats but, depending on the aircraft, you might get a personal socket, or you would have to share.

In Delta Airlines’ main cabin for passengers with economy class tickets from USA, a sleeping kit and a complimentary headset are provided only on long-haul international flights. Taking note of the in-flight entertainment, the screen size is the standard 9 inches but, as an icing on the cake, the airline promises to keep you engaged throughout the flight with complimentary access to Delta Studio.

Coming to United Airlines’ economy class, passengers do not have the luxury of being provided with any amenity or sleeping kits. Well, United makes up for that with food, which we’ll see later! Taking note of the in-flight entertainment, United has been removing seatback screens from most aircraft, arguing that passengers carry personal mobile devices in their handbags these days. You might find seatback screens on a few selected aircraft with limited entertainment options. However, United bleakly tries to keep its passengers entertained on long-haul flights with complimentary access to the United App, which has to be downloaded prior to boarding the flight.

WiFi is available for purchase on both the airlines, on select routes.

Delta offers a complimentary meal along with beer, wine, spirits, and Starbucks only on long-haul international flights. On top of that, Delta’s inflight dining boasts of 14 different special meals to choose from, starting with toddler meals to gluten-free meals and vegan meals to the meals that adhere to religious requirements.

On the other hand, on international flights, United offers complimentary alcoholic and non-alcoholic beverages along with a three-course complimentary meal and illy coffee. On United Airlines flights longer than 12 hours, a complimentary mid-flight snack is offered to make you feel full for the rest of the flight.

Spirits and liqueurs are available for purchase on both airlines.

Seat Upgrades: From Economy to Business

There are multiple options for you to upgrade to business class from economy seats on Delta flights. You can redeem your frequent flyer miles for the same. Delta offers a complimentary economy to premium economy or business upgrades to Medallion Elite members, alongside allowing the purchase of an upgrade on the day of departure.

Unlike Delta passengers, not everyone can upgrade from economy to business on United Airlines flights. Only those with elite status with the airline can make it on United business flights by upgrading their economy or premium economy tickets.

The award-winning Delta One – Delta Airlines business class – boasts of 180-degree flat-bed seats which measure from 76 to 82 inches, based on the aircraft. Set in a 1-2-1 layout, each seat comes with a Westin Heavenly branded in-flight bedding, an oversized duvet, a down-alternative pillow, and a dedicated overhead bin.

United Airlines’ business-class Polaris seats are more or less the same as Delta’s business class seats. The 180-degree flat-bed seats are 72-in long and 6-in wide in United Polaris. On most of the aircraft deployed for United business class flights, the seats are set in a 1-2-1 or a 2-2-2 layout, except the newer planes with a more spacious 1-1-1 layout. Each seat features a dedicated overhead bin, a cool-gel pillow, and bedding from Saks Fifth Avenue with two different types of blankets – a quilted duvet and a lighter throw blanket. Mattress cushions are also available on request.

In Delta Airlines’ business class, passengers are provided with an LSTN noise-canceling headphone and a TUMI amenity kit containing various travel essentials like dental kit, tissues, earplugs, hand and body lotion, and a lip balm. If you feel comfortable in a pajama during bedtime, do make sure to carry one while traveling on Delta’s long-haul flights from USA to Philippines.

United Airlines provides its business class passengers with a noise-canceling headphone, a pair of slippers and a random theme-based Polaris amenity kit that packs in similar travel essentials mentioned above. However, on flights longer than 12 hours, passengers are given pajamas on request.

Delta One’s inflight meal service varies depending on the destination you travel to. Delta has partnered with chefs worldwide to pamper passengers with regional delicacies.  Moreover, Travelers with Delta business flight tickets are privileged enough to choose meals of their preference, three days prior to the journey. Delta has roped in Master Sommelier Andrea Robinson to curate the world’s best wines for premium passengers.

United promises to keep its Polaris business class passengers’ appetite full throughout the flight, starting with snacks, a five-course meal and the arrival meal. In a bid to take its dining experience a step further, United has collaborated with chefs from The Trotter Project, a nonprofit organization. You can also savor the complimentary alcoholic and non-alcoholic beverages, along with ‘a la carte’ snacks to satisfy your mid-flight cravings. Regional specialties are only offered on flights from USA to South Korea, Thailand, the Philippines and other few destinations in Asia.

The perks of flying Delta business class include complimentary access to Delta Sky Club lounges across the world, regardless of membership. However, if you have elite status with the airline, you can take a guest or two, along with you for free.

Unlike Delta, United doesn’t allow you to take guests but offers complimentary access to its Polaris lounges worldwide and the lounges of its codeshare partners.

Lounge memberships can be purchased for both airlines, depending on your status with the airline.

Sky Priority hassle-free boarding, access to dedicated check-in counters, expedited baggage handling, and fast security check-in are among the perks of booking Delta One flights. However, concierge access and bag delivery are only available at selected locations.

Delta Airlines’ fleet consists of 909 Airbus, Boeing, and McDonnell Douglas aircraft, making it one of the largest in the world. However, Delta has an average fleet age of 15.8 years but its 112 MD-80/90 aircraft of 26 years, is the oldest in its fleet.

United Airlines’ fleet consists of 790 Airbus and Boeing aircraft, with the average fleet age of 15.1 years.

Wuhan Coronavirus Outbreak: All You Need to Know about Coronavirus Symptoms, Impact, Precautions