Traveling to China can be an exhilarating experience in a tourist’s life. The moment flights to China arrive at Beijing International Airport or any other port of entry, foreign tourists should take note of the Chinese customs, traditions, manners, and culture. If you are planning a trip to China, here is a list of few things not to do in China. These tips might help you not only to be safe but also enter their good books. 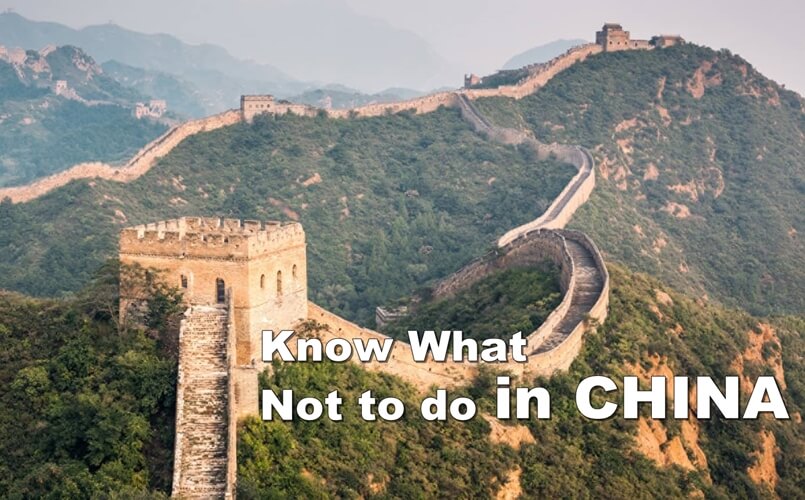 The Chinese are often uncomfortable discussing political topics, religious policies, territorial and economic conflicts with foreigners as there are chances it may cause embarrassment to their country. Refrain from talking about death or mentioning a person who has recently passed away as it is a quite serious topic to Chinese. Talking about politically sensitive or uncomfortable topics stands as one of the most important in the list of what not to do in China as a tourist.

With around 55 minority groups in China, they have their own traditions and customs. They do not allow anyone to touch the objects related to their ancestors and worship. It is also important to remove your hat, sunglasses, and shoes before entering temples in China. Pointing your finger at the statues and stepping on the doorsills is also one of the things not to do in China.

The Chinese are considered to be less affectionate and most of them consider handshakes, hugs, and kisses unnatural; so it is best to just greet them verbally or with a slight nod instead. Owing to traditions and religions, the Chinese consider the head more sacred than other parts of the body. Do remember while in China that a touch or a pat on the head could be considered disrespectful.

If you are planning on using a pair of chopsticks in China, do not forget its etiquette. The Chinese believe that chopsticks are only used to eat and not to point at anything. Don’t place chopsticks inside a bowl after your meals; rather place it on the top. Messing up the chopstick etiquette is on the list of things not to do in China as a tourist.

The Chinese rarely use credit cards; however, they prefer mobile and cash payments. If you go on a shopping spree in China, relying solely on a credit card might turn out a disaster. It is better to install an application like WeChat, which they frequently use for payments.

It is usually not recommended that you board an unlicensed taxi as most of the drivers lack English knowledge. The most reliable means of transport are public busses or taxis operated by legal companies with their name on the doors. Licensed taxi drivers use a meter to calculate the fare; this will save you the trouble from getting ripped off. So from the list of things not to do in China, make sure you choose the proper means of travel for a hassle free journey.

The Chinese are habituated to exchanging small gifts frequently and not just on special occasions. For instance, if you are dining at a person’s house or attending a pre-planned meeting, do make sure to take a gift along as a goodwill gesture or a token of friendship. Ignoring the social etiquette is also on the list of things not to do in China. You won’t be penalized or punished for not exchanging gifts though.

The Chinese do not follow practice of tipping in return for any service provided to them. When you tip the restaurant staff or bellmen, they might eventually return the money back in a state of confusion. In order to refrain from putting yourself in an awkward situation, make sure to restrain your generous tipping nature.

Also Know: 7 Things not to Do in Thailand as a Tourist

When you are in China, do not forget that their firewall blocks multiple sites including Facebook, Twitter, Instagram and YouTube. However, to access these sites you’ll need a VPN. While purchasing a VPN, do not forget to check if it covers China as well.

Except star-rated hotels in China, many other places do not provide toilet paper in restrooms. While traveling to supermarkets or on trains, you might find tissue dispensers but with nothing inside them. Believe it or not, no one likes to get stranded inside restrooms without toilet papers in times of emergency. Luckily for you, local shops sell packets of tissues for cheap prices, so make sure to grab one.

Along with the list of what not to do in China as a tourist, Fly High also brings you much more information about other tourist destinations across the world. Fly High is a subsidiary of iEagle Travel, a leading international travel organization booking cheap flights on Air China, Cathay Pacific and other major airlines.