Well known for its architectural wonders, both modern and ancient, China has again hogged the spotlight with its new international airport in Beijing. Nicknamed “starfish” owing to its unique design, Beijing Daxing International Airport (PKX) opened to much fanfare with an inauguration ceremony attended by Chinese President Xi Jinping on September 25, 2019. 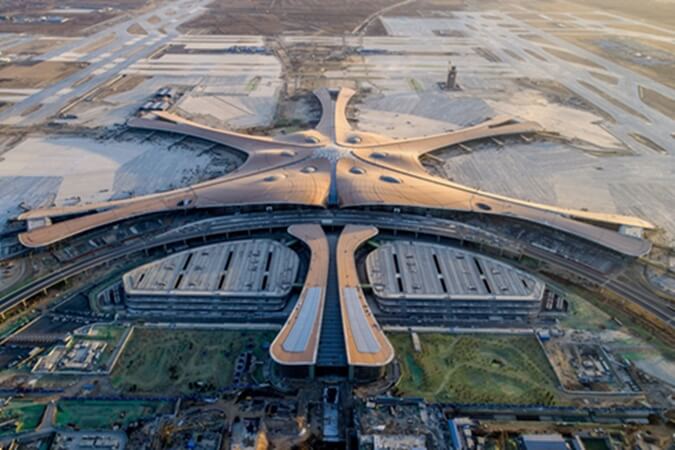 Construction and Cost of Daxing Airport:

The initial proposals were made in 2008, for Beijing’s second international airport (PKX) as the already existing Beijing Capital International Airport had been hitting its full design capacity giving airlines a hard time to add flights when required.

Initially, the amount estimated for the construction of Beijing Daxing International Airport was $17 billion but it increased to a whopping amount of $63 billion as transportation links had to be built due to its distance from the city center. The transportation links include high-speed rail, metro, expressways, bus routes, and inter-airport transportation systems.

Designed by Zaha Hadid Architects, a British international architecture firm, the starfish-shaped Beijing Daxing International Airport, spread over 700,000 square meters, is the world’s largest single-structure airport terminal that houses 268 aircraft parking bays, four civilian runways, and a military runway. The terminal building consists of 8,000 rooftop windows and eight giant C-shaped columns, each with a 106-meter-wide skylight at the top which enriches the terminal with natural light.

Daxing Airport’s state-of-the-art technologies guarantee take-off and landing with a runway visual range of 75 meters and a minimum approach of less than 15 meters even during low visibility conditions such as smog and fog. For instance, during times of low visibility, the pilot of an incoming aircraft will have a proper visual of the runway before landing.

The chief engineer in charge of the construction, Guo Yanchi says, “It is only 600 meters, or less than an eight-minute walk, from the center of the terminal to the farthest boarding gate in each wing. Despite the expansive design, it’s more efficient for the passengers than any other large airport terminal of the same size in the world”.

Other airlines including British Airways, Malaysian Airlines, Finnair and Air China have already announced that they will relocate all or a part of their flight operations to Daxing International Airport (PKX).

The first phase of the project has a modest target of hosting nearly 72 million passengers, 2 million tons of cargo and mail and 620,000 aircraft movements per year by 2025. When Daxing Airport (PKX) reaches its full operational capacity of 100 million passengers per year, it will become one of the world’s busiest airport in terms of passenger traffic.

China takes the world by storm with its futuristic technology and booming economy; multiple countries are all set to pursue a mutually benefiting trade-relationship with China. Moreover, China’s aviation market is believed to overtake the US market by 2022.

Delta Airlines is Set to Move its USA to China Flights...